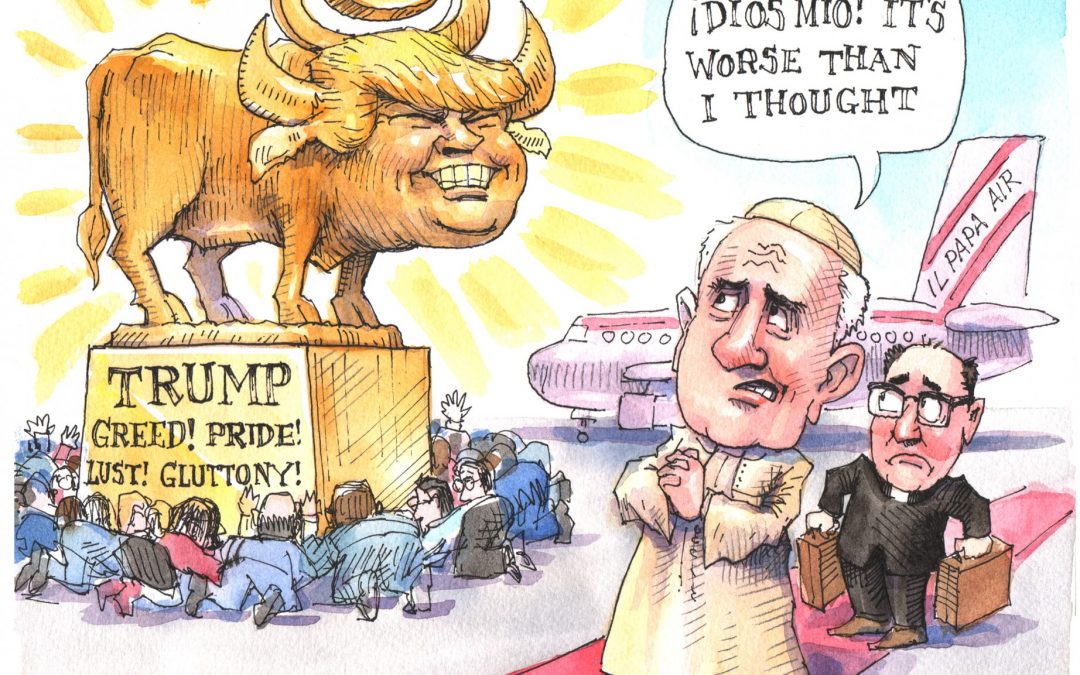 Donald Trump is the perfect poster boy for The Fearful Mindset. His behaviours are consistently aligned with those of someone under the thrall of The Fearful Mindset. The means he routinely uses to further his agenda are textbook examples of methods employed by people operating according to the Fearful Mindset values. As explained in The Hopeful Mindset, our brains evolved to help us survive and, to that end, certain behaviours became favoured over others. These behavious and the values associated with them formed the basis for our default mindset. This default mindset is a Fearful Mindset because it focuses on the detection of possible threats in the environment and automatic reactions to them. Because The Fearful Mindset operates by default and unconsciously, it is not surprising that many of us unwittingly operate according to its values. But Donald Trump represents someone who has taken the negative characteristics of this mindset to considerable extremes.

Even at the level of meeting the basic human needs for physical existence we see an exaggerated approach. As human beings we need to have access to basic resources (food, water, air, warmth) in order to survive. This requires us to acquire these resources in sufficient quantities to keep our bodies functioning. Hopefully, we can accumulate sufficient quantities of these resources to live reasonably comfortably. The Fearful Mindset, however, compels many to accumulate significantly more resources than are necessary for even comfortable existence. When one person hoards limited resources there are fewer available to others. Donald Trump has accumulated more resources than he could ever need. It would not be an exaggeration to say that Trump’s penchant for acquiring and hoarding resources is nothing other than common greed.

Another characteristic of people living under the influence of The Fearful Mindset is a liking for strict boundaries and inflexible categories along with hyper-vigilance in maintaining those boundaries and categories. It is a desire for security that fuels this drive. We see this trait in Trump’s elimination of anyone who he sees as not a hundred percent on board with his agenda. It’s definitely “my way or the highway” with him. He also likes to cast situations in them-or-us terms, digging trenches between those he sees as loyal to him and those who question or oppose him. In so doing, Trump effectively insulates himself from information that might contradict his assumptions. Obviously, this is not conducive to considering all sides of an issue before making important political decisions that could affect millions of people. And then there’s the wall he wants to build between the US and Mexico.

A strong yearning for social status is typically part of The Fearful Mindset and Trump displays this tendency in spades. He is constantly claiming that he is or his ideas are the best of any president. When it turned out that the attendance at his inauguration was less than that of Barak Obama’s inauguration Trump flatly denied the facts and claimed he had the biggest audience ever even though there were videos showing the actual size of the attendance. Any facts that show him to be less than the best are dismissed as fake news.

Within the realm of The Fearful Mindset success is measured in terms of personal power over others. Competition is all about winning at all costs. People operating from the values of our default mindset value ambition highly. Certainly some level of ambition is necessary for individuals to survive and thrive in the world but those with a Fearful Mindset have an exaggerated admiration for ruthless ambition. Donald Trump exemplifies this attribute. There are countless stories of those who he has trampled in his quest for wealth and power. His ambitions have pushed him to seek dominance by whatever means are necessary. And now he has reached the pinnacle of personal power and influence, the presidency of the United States of America, and is admired by millions of supporters who, like him, are living within the dangerous belief bubble of The Fearful Mindset.

Donald Trump is a product of The Fearful Mindset. He blindly follows the unconscious urges of our common default mindset.  Unfortunately, this mindset is based on the faulty assumption of independent, separately existing selves. This presumption, sadly, is not all that uncommon. It’s just that, in Trump’s case, he is in a position to do more damage than others of the same mindset. But, who knows, maybe having such a glaring example of the problems inherent in The Fearful Mindset in front of the world on a daily basis will spur people to pursue values more in line with those of The Hopeful Mindset; values like resilience, sustainability, respectful relationships, and making contributions in support of a better future.