Why Bother When No One Is Listening? 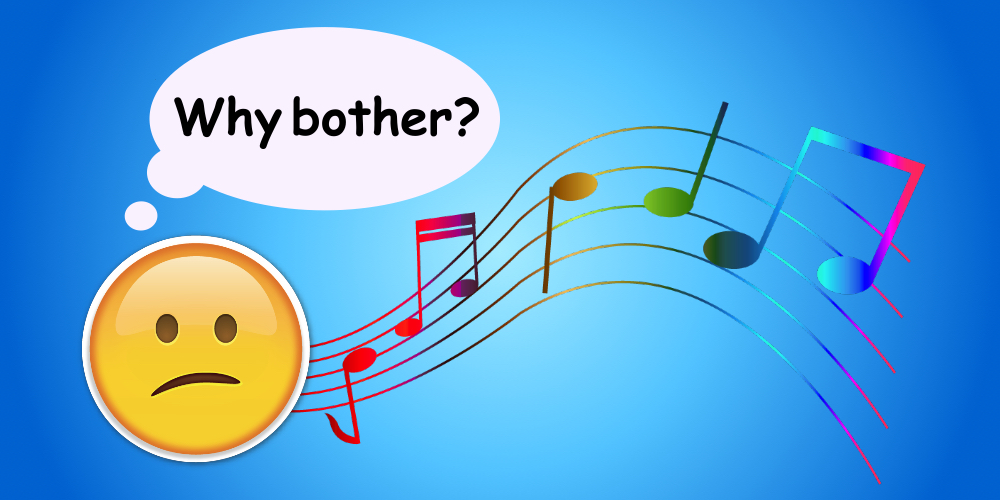 Two friends of mine are currently working on a new CD. This is the second CD they have worked on together. The first CD has received high praise from a number of reviewers but, so far, the sales have not taken off as hoped. In spite of their prodigious skills and creativity neither of my friends has risen to the lofty heights of fame or fortune. Throughout their careers they have often struggled financially. They have laboured to produce CDs of high quality that have not sold very well. Brilliant live performances have sometimes been poorly attended, or worse, attended by unappreciative audiences. Both of these friends have asked themselves why they should bother when it seems no one is listening. Why dedicate themselves to their art when there is so little reward? Like banging your head against a wall, it might feel good if they stopped.

But there is a problem with just simply stopping. For these extraordinarily talented musicians making music is a significant part of who they are as individuals. Like a wolf that must howl at the moon these people must make music. Doing so has become a dominant aspect of their existence. It has become embedded in their way of being in the world. So, not making music is not really an option. But what are you to do when when being who you are and doing what you must do feels like punishment?

I should explain here that the process of creating CDs is immensely rewarding for both of my friends. They have become close friends as a result of their involvement in the projects and they have developed, almost effortlessly, a way of working together that is a source of great enjoyment to them both. I have been privileged to be present during some of their recording sessions and have witness this extraordinary process first hand. The “why bother” question has little to do with the process. It is directed toward the situation that arises once the work is completed; getting people to hear and appreciate what they have so lovingly created. Consequently, the question is actually more like: “Besides the wonderful experience of creating the work, why bother attempting to distribute it to a wide audience when the evidence, so far, indicates that this is not going to happen.”

This question of “why bother” raises fundamental human concerns related to the meaning and purpose of the things we do. As examined in The Hopeful Mindset, the meaning we ascribe to our actions is largely determined by the mindset within which we are operating. Likewise, the purposes of our actions, what we hope the outcomes will be, are significantly influenced by our dominant mindset. As used in The Hopeful Mindset the term ‘mindset’ refers to a framework that sets out relationships between our biological and psychological survival needs, the values that we assume will support meeting those needs, and the means that we might employ to satisfy them. The crucial point in these relationships is that the values that we adopt are dependent on the way we see our place in the world. The means we utilize to meet our needs are, in turn, decided by the values to which we have subscribed. Fundamentally, then, the meaning we perceive in situations and the purposes we pursue depend on the view we hold concerning our individual places in the world.

In The Hopeful Mindset two mindsets are examined. The first of these, The Fearful/Cynical Mindset, is the mindset with which all humans are born. This mindset, our default mindset, has been fashioned by evolution to enhance our chances of survival. Unfortunately, evolution typically works very slowly, far too slowly to evolve the human brain from one adapted to living conditions about 10000 years ago to one built to deal with the complex situations we find ourselves in today. The result is that we all have brains that are ill-equipped to deal with the realities we find ourselves facing in the modern world.

Our default Fearful Mindset is the product of the evolution of the human brain. This mindset arises naturally in our outdated brains and resides primarily in the unconscious mind. We are not typically aware of its existence. The view that The Fearful Mindset promotes is one where we are each independent, separately existing individuals living in a world of independent, separately existing other individuals and things. This assumption places us in a precarious and vulnerable situation. It seems we are, at all times, exposed to the “slings and arrows of outrageous fortune”.

While this Fearful Mindset has evolved naturally it is not actually in tune with the scientific understanding of reality. The scientific view places us very differently in the world. According to science we live in an interdependent reality where apparently separate things exist only through complex webs of dynamically interacting phenomena. In this view there are no completely independent, separately existing things. The interdependent view of reality is at the heart of The Hopeful Mindset. Because of this interdependent perspective the values arising from The Hopeful Mindset are quite different from those of The Fearful Mindset. The hopeful value related to the need for meaning is humility. We are humbled by the incredible interplay of forces that give us life and we recognize that the hubris of attempting to control nature found in The Fearful Mindset is misplaced. Whereas those under the sway of The Fearful Mindset value things that they believe give them personal advantages regarding social and financial status, people who have taken the interdependent perspective to heart value things and activities that support life in general. Meaning is measured relative to the good of the many over the good of the few or the one. The value related to the need for purpose in The Fearful Mindset is personal success. In The Hopeful mindset the corresponding value is personal contribution. An individual is successful whenever they contribute to the well-being of living things and the systems that support life on our planet.

Returning to the “why bother” question raised by my musician friends, it is now possible to see that this question has two answers, one arising out of each mindset. From the point of view of individuals who believe themselves to be independently existing selves, what matters is gaining relative social and financial status over others. In this case the only reason to bother doing something like making music is if there is some possibility that it might improve, or at least maintain, the individual’s social or financial status. On the other hand, from the point of view of individuals who understand themselves to exist interdependently in the world, what matters is the wellbeing of the systems, living and nonliving, in which they have their being. The primary reason to bother making music in this mindset is that, in doing so, lives are enriched. Any contribution, no matter how seemingly small, to the greater good of humankind and the living web in which it exists, is valid because it is the collective actions of everyone that is needed to achieve the common good. Contributing beautiful music is a perfect example of this regardless of the size of the audience or the amount of financial success.

In the grand scheme of things, it matters little whether 5 people or 50000 people hear and enjoy a piece of music. What matters is that a contribution has been offered that has the potential to enrich human lives. The intention to do good in the world is what counts as meaningful from the perspective of The Hopeful Mindset. When intentions are informed by the values of the interdependent mindset, actions taken on their behalf produce results that are beneficial to living beings and the environment that supports them. The payoff for the individual is the respect and gratitude afforded them by those who recognize the critical importance of good intentions and the actions that flow from them. I implore my musician friends to please, continue to make music. Valuable human lives are enriched by your efforts.