No Pain, No Gain: How Suffering Could Save The World 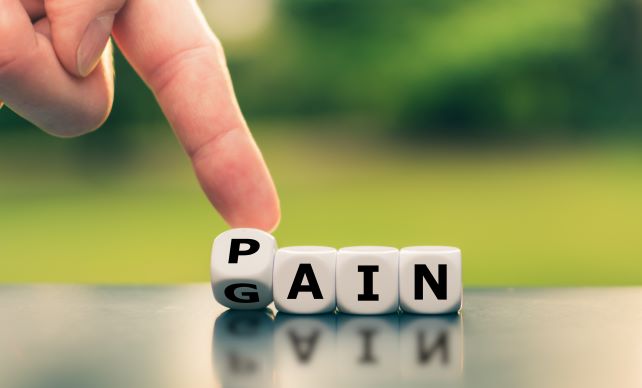 “Hope is justified when a realistic path toward a better future exists.”

From The Hopeful Mindset

Each of us develops, over the course of our lifetime, a personal worldview comprised of our beliefs about the way things are. Because this worldview is constructed out of personal experiences and personally adopted ideas it is an internally integrated whole. Each piece reinforces the other in what we believe to be a cohesive and sensible picture of reality. Much has been written in recent years about how unreliable our thinking processes can be but that doesn’t change the fact that we have each constructed a convincing worldview according to our own acquired criteria for truth. These criteria themselves are beliefs we have acquired about how to differentiate between and reliable and unreliable information. This whole system is fraught with unreliability.

In order to understand why we are so resistant to changing our beliefs we need to look at the way beliefs are formed and how they become self-reinforcing.  A few years ago I came across a graphic that, to me, captures the way our worldviews are formed. It was in a book called Liminal Thinking by Dave Gray 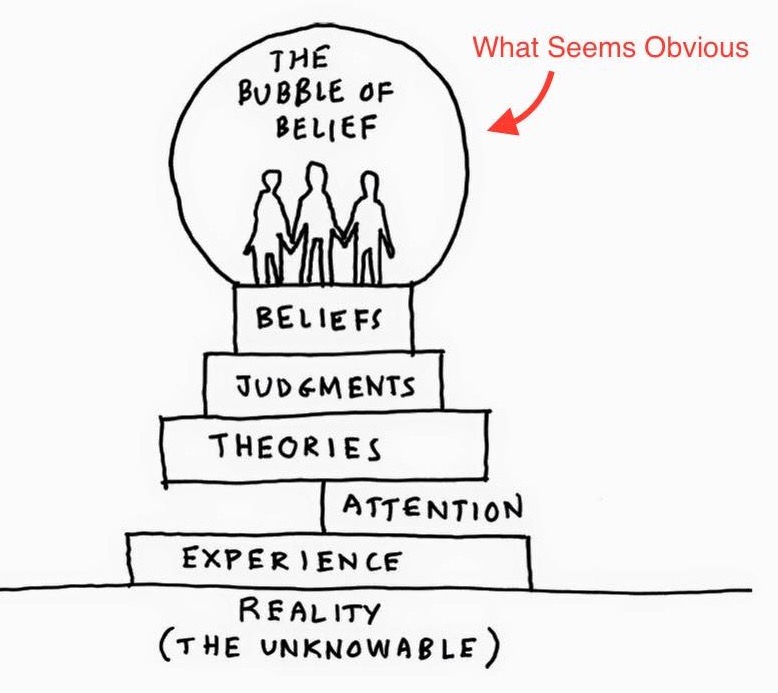 At the base of the diagram is Reality. It is labeled as “The Unknowable” because we can never be aware of whole of reality. As the diagram indicates we are aware of only a portion of Reality which is labeled as Experience. Of all the aspects of Reality that we Experience we focus our Attention on certain things according to our brain’s interpretation of what is most important. Out of the things we have paid attention to we formulate Theories about what they mean relative to what we already know. We then Judge these theories as to how true they seem according to what we have already come to believe. If they agree with what we already believe to be true they become part of our Bubble of Belief; the things that we believe we know about reality and ourselves. Conflicting information literally does not make sense within the integrated logic of the Bubble of Belief and is, therefore, excluded. To each of us the contents of our Bubble of Belief seem obviously true because we have knitted them together so that they are internally consistent. However, being internally consistent only means the beliefs make sense relative to each another. But, internal consistency is no guarantee that a Bubble of Belief is an accurate representation of the way things actually are.

In the human domain we heavily influence each other in terms of the Theories, Judgements, and Beliefs we adopt. This is why people belonging to groups such as cultures, societies, organizations, religions, and nationalities tend to have similar Bubbles of Beliefs.

Given all of the above the idea of changing an individual’s belief system seems like an impossible challenge. Each person’s Bubble of Belief reinforces itself and is reinforced by others and groups having similar beliefs. The intransigence of religious and political beliefs are two areas of human interaction that demonstrate the power of in-group reinforcement in the entrenchment of belief systems.

“Beliefs are the psychological material we use to co-create a shared world, so we can live, work, and do things together. Changing a shared world requires changing its underlying beliefs.”

“And the longer a group of people have been operating with a shared map, the more likely there will be a mismatch between the map and reality.”

This being the case, is there really a justification for hope? That is to say, is there any hope that people might abandon their current Bubble of Belief in favour of a different set of beliefs? Can we justify a hope that significant numbers of people will convert from the Independent Mindset to the Interdependent Mindset?

I think the answer to this question lies in the old saw about psychological change. Change is possible but only if the individual wants to change. If this is true then what would it take for people to want to abandon their hard won beliefs in the assumptions of the Independent Mindset and consider embracing the concepts of the Interdependent Mindset? In my experience there are at least two ways that this motivation to examine one’s belief system can occur.

The first involves people who for their own reasons constantly questions the validity of all kinds of assumptions (cultural, familial, religious, national, regional, etc.). They constantly upgrade their belief systems and are open to new ideas and alternate explanations. Sometimes such individuals may not be rigorous about a process of validating ideas (theories and judgements) and wind up with unfounded belief systems that are no more defensible than the assumptions they question; conspiracy theories and New Age supernaturalism come to mind. However, if an individual couples a curiosity about commonly held assumptions with an empirical method to verify new and alternate explanations it is then possible for them to move toward increasingly accurate beliefs about the nature of existence. This is particularly true when the individual has been trained in critical thinking and the scientific method of testing hypotheses. Generally, people in this category are internally motivated to seek the knowable facts about existence. Unfortunately, the people I have just described make up a very small segment of the world’s population leaving the vast majority with little or no internally motivated desire to examine their Bubbles of Belief.

But even when there is no internal curiosity encouraging people to question their assumptions people may be forced to do so by changing social and environmental circumstances. It is generally agreed that people change when the pain of not changing outweighs the pain of changing. When a belief or set of beliefs is causing an individual to suffer and the individual comes to realize that his or her beliefs are the source of suffering he or she may be willing to look at alternative explanations. The key is that the individual must clearly see that his or her assumptions are a source of suffering. So long as there is denial of the facts regarding the role of beliefs in suffering the individual will not be motivated to consider alternate explanations about the nature of reality. But, at some point, the intensity of suffering may reach a level such that it forces a person to question his or her ideas about the way things are. For example, if a farmer is a climate change denier but that farmer’s crops suffer repeated failure due to unusual climate conditions the farmer may begin to question the whole issue of climate change. The pain the farmer is experiencing may motivate him to look more objectively at what is actually going on.

What I am suggesting is that there may be an unexpected source of hope in the increasing degree of suffering caused by adherence to the values of Independent Mindset. As these values continue to fuel climate change, the pollution of waterways, over-population, the over-use of non-renewable resources, etc. perhaps the ever accumulating consequences will become sufficiently undeniable and insufferable that they provoke individuals to begin to reexamine their Bubbles of Belief and to be open to considering alternatives such as the interdependent view of reality and the values inherent in it.

No pain, no gain. In biology it is an axiom that adaption (evolution) occurs when perturbations in environmental conditions require organisms to have acquired a set of traits compatible with survival in the new circumstances. Similarly, societal change often occurs after some shift in the status quo creates considerable discomfort among large segments of the population. By living according to the values of the Independent Mindset we have driven changes in our environment to an extent that they require a new way of being in the world in order to survive.

Hopefully, we have already, or are fast approaching, the point where increasing numbers of people are arriving at the level of discomfort whereby they are no longer prepared to accept the status quo, and who are opening up to other ways of understanding the nature of the world, and are willing to consider the more hopeful implications of the interdependent mindset. It is probably too late to escape much of the pain we have brought upon ourselves but here’s hoping our individual and collective suffering motivates increasing numbers of us to question our outmoded Bubbles of Belief and to take action toward a more sustainable and compassionate future.

This is not to say that we can sit back and expect that the changes that are needed will happen on their own. As we come to realize that changes are required and what those changes are we become responsible for making them happen. Once the Bubble of Independent Beliefs bursts there is no going back. We are obliged by the force of our knowledge to act in ways that further the making of a world shaped by the recognition of the interdependent reality in which we exist. We are motivated to spread the word about the perils of the independent mindset and the promise of the interdependent mindset. We are compelled to contribute to a sustainable and compassionate world.