The War in Ukraine: Conflicting Mindsets 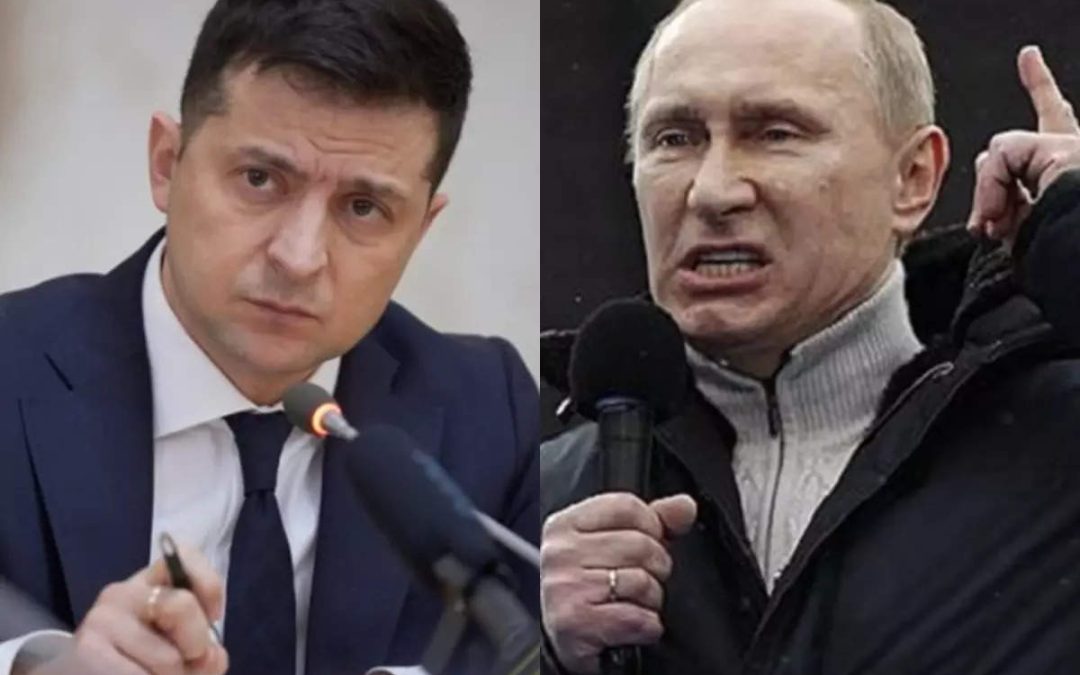 The conflict in the Ukraine is a prime example of the independent mindset in conflict with the interdependent mindset. Consider the following descriptions of Vladimir Putin and Volodymyr Zelenskyy from Wikipedia.

New York City-based NGO Human Rights Watch, in a report entitled Laws of Attrition, authored by Hugh Williamson, the British director of HRW’s Europe & Central Asia Division, has claimed that since May 2012, when Putin was reelected as president, Russia has enacted many restrictive laws, started inspections of non-governmental organizations, harassed, intimidated and imprisoned political activists, and started to restrict critics. The new laws include the “foreign agents” law, which is widely regarded as over-broad by including Russian human rights organizations which receive some international grant funding, the treason law, and the assembly law which penalizes many expressions of dissent. Human rights activists have criticized Russia for censoring speech of LGBT activists due to “the gay propaganda law” and increasing violence against LGBT+ people due to the law.

In 2020, Putin signed a law on labelling individuals and organizations receiving funding from abroad as “foreign agents”. The law is an expansion of “foreign agent” legislation adopted in 2012.

As of June 2020, per Memorial Human Rights Center, there were 380 political prisoners in Russia, including 63 individuals prosecuted, directly or indirectly, for political activities (including Alexey Navalny) and 245 prosecuted for their involvement with one of the Muslim organizations that are banned in Russia. 78 individuals on the list, i.e. more than 20% of the total, are residents of Crimea.

During the first two years of his administration, Zelenskyy oversaw the lifting of legal immunity for members of parliament (the Verkhovna Rada), the country’s response to the COVID-19 pandemic and subsequent economic recession, and some limited progress in tackling corruption in Ukraine.

In June 2019 it was announced that the president’s third major initiative, which seeks to remove immunity from lawmakers, diplomats and judges, would be submitted after the July 2019 Ukrainian parliamentary election. This initiative was completed on 3 September, when the new parliament passed a bill stripping lawmakers of legal immunity, delivering Zelenskyy a legislative victory by fulfilling one of his key campaign promises.

In June 2021, Zelenskyy submitted to the Verkhovna Rada a bill creating a public registry of Ukraine’s oligarchs, banning them from participating in privatizations of state-owned companies, and forbidding them from contributing financially to politicians.

After the start of the [Russian] invasion, Zelenskyy declared martial law across Ukraine and a general mobilisation of the armed forces. His leadership during the crisis has won him widespread international praise, and he has been described as a symbol of the Ukrainian resistance. Zelenskyy was named the Time Person of the Year for 2022 and opinion polls in Ukraine have ranked him as Ukraine’s greatest president.

The actions depicted in the above passages speak volumes about the personal values to which each of these political leaders subscribe. As all individuals do they each hold values based on their personal beliefs about the nature of reality and the place of humans within those conflicting realities.

This quotation from Maria Popova encapsulates the issue arising out of these conflicting mindsets.

Our greatest limitation is not that of imagination but that of perspective — our lens is too easily contracted by the fleeting urgencies of the present, too easily blurred by the hopes and fears of our human lives.

The Cynical and Hopeful mindset’s premises and the values that each give rise to are the bases upon which individuals ground their beliefs about the nature of reality and the place of human beings within those realities. A mindset’s values arise from the assumptions it makes about the nature of reality. Vladimir Putin and Volodymyr Zelenskyy subscribe to conflicting mindset. Putin assumes the reality inherent in the Cynical Mindset (separate/independent existence) to be true while Volodymyr Zelenskyy believes the reality identified in the Hopeful Mindset to be the way of things (interdependent/connected existence). As their behaviours demonstrate the mindsets of the two men inspire very different decisions concerning what a leader of a nation should aim to accomplish. Putin’s actions exemplify the values of the Cynical Mindset (arrogance). In contrast Zelenskyy’s actions exemplify the values of the Hopeful Mindset (humility). 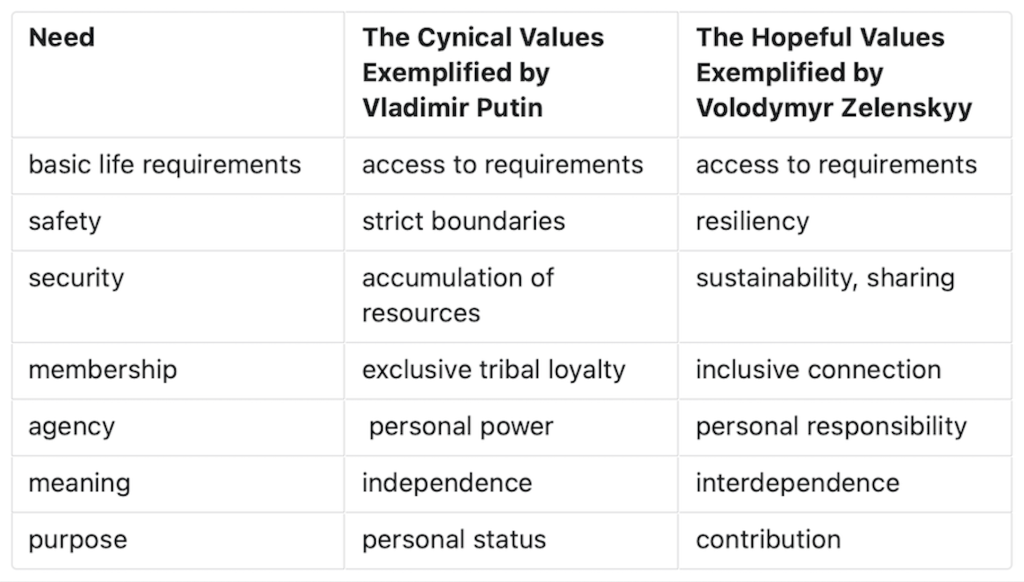 As discussed in The Hopeful Mindset, the values of the Cynical Mindset, because they are based on a belief in a reality made up of separate things in which individuals exists independently from one another and the things in the world, tend to encourage conflicts between differing exclusive groups. War, like the one now raging in Ukraine is one such conflict fuelled by Putin’s adherence to the assumed values of the Cynical Mindset.

The values of the Hopeful Mindset, on the other hand, tend to support compassionate and sustainable initiatives which have the potential to heal our wounded world and bring peace among its peoples. This is why it is a Hopeful Mindset.